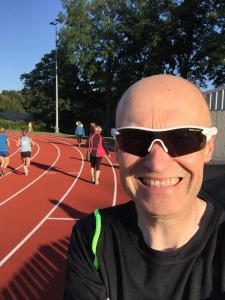 What do you do on your birthday? When you are young they are exciting occasions because you know you are taking another step toward the goal of adulthood.  When you are older they can be an unpleasant reminder of the inevitable passing of years.  I refuse to be drawn in to that morbid trap though because life is for living to the full and to that end, my birthday treat was to compete in a running race!

The event I participated in on Wednesday was called a “Yorkshire Vets Grand Prix”.   This might conjure up images of James Herriot in a Formula 1 racing car but of course it’s no such thing, as you would find out if you knew the name of the organisation is “The Yorkshire Veterans Althletic Association”.  Now for me, the term “Veteran” suggests octogenarian war heroes at Remembrance Sunday walking slowly not so much because they are old but due to the weight of bravery medals pinned to their breasts.

In athletics, a “veteran” is nothing like this.  It simply means you are getting on a bit requiring no greater feat of bravery than simply ageing.  To qualify as a vet, you need to reach the staggering old age of 35 and I hear you saying “35? If that’s old what am I?”.  The other thing is that you might think that the “older” runners would be slower and give you a better chance, but you had better think again.

In my running club, for ages the fastest male runner was over 55 and when I went to a presentation evening at another club, almost all the prizes for fastness were being won by the over 45s. Currently, our fastest lady by far in my club is 35+.  When you enter one of these events all the excuses go out the window and there is nowhere to hide because you can no longer say “oh well, I’m not doing so well because I’m older”.  They make you wear little numbers on your back saying which age category you are in.  For example mine says M55, meaning a man over 55 (but younger than 60).  It reminds me of event categories in para-athletics denoting degrees of disability but here that similarity ends. 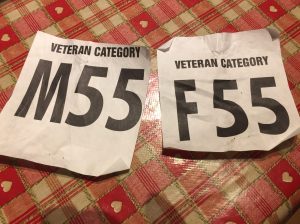 Make no mistake, my sport is full of fast old men and women.  When I started out along the canal paths of Halifax on the Wednesday “Grand Prix” race, I was being passed by guys wearing M60, M65 or even M70!  It felt like they put these on their backs so that when I am passed, it rubs it in that I am slow not because I am old, but because I am rubbish!

Before you start to console me don’t worry, I don’t really think I am rubbish.  The great thing about the Yorkshire Vets races is that they are inclusive and don’t make anyone feel inferior.  It’s very much a “running club runner” event but that doesn’t make it feel elite or exclusive, but it does include some awesome athletes and it’s a pleasure to run with them.

“Grey hair is a crown of splendour; it is attained in the way of righteousness.”  Proverbs 16:31 (NIV)