A while ago I wrote a Blog called “The Hare” stating “There is no such thing as slow”, but today I am going to talk about “fast”.  “Fast” of course, is relative.  If anyone has studied Eienstein’s theories of relativity, they will know that perversely, the speed of light is distinctly not “relative” since it will always messure the same regardless of the speed of the observer (which has always seemed seriously weird to me).  However you look at it, the speed of light is fast, but what about my running?

Well it’s all relative.  Relative to the tentative 8 miles I did a few weeks ago, today’s run was quite a bit quicker and felt a lot more comfortable.  When you have run at a particular level, it can be quite difficult accepting your limited performance while recovering from illness or injury.  What I was reminded of today, is that even though you find it hard to understand how you can ever run faster, training WILL pay off and when you do start to run faster it will actually feel easier!

That’s how I felt today, I was feeling my pace comfortable and without even trying harder, it was considerably quicker.  The other reason to be pleased is that today, I reached my 100 miles for the month which means I get another awesome medal from Awesome Virtual Running Events.  If you are reading this Tony, the challenge has encouraged me to push the envelope just a little bit this month to reach the goal and set me up for the next few final weeks of marathon training.

“But as for you, be strong and do not give up, for your work will be rewarded.’” ‭‭2 Chronicles‬ ‭15:7‬ ‭NIVUK‬‬ 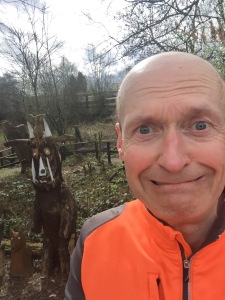 You wouldn’t believe I saw a Gruffalo today!  In the story, Mouse thinks The Gruffalo is an invention of his own imagination until he meets him face to face.  To achieve things in sports like running, you first have to believe you can do it before you see the victory or goal achieved.  When I finally recovered from a virus at the beginning of March, I chose to believe my physio, that I could still get fit for the London Marathon.  Today’s 15 mile run (which included the encounter with The Gruffalo) was tough, buts put me back on target!

After a run I did on Friday which included the Rothwell Country Park hill and yesterday’s Temple Newsam parkrun (a veritable hill fest), I chose to go flat!  From Metley along the south side of the canal for about 3 miles to then circumnavigate Skelton Lake.  It is a bit too isolated for comfort to be honest; the burned out car along one of the tracks says it all and some cleaning up and landscaping would not go a miss.  There are some planned new developments in the area which might make it more accessible.

I then returned along the canal to St Aidan’s (stunning) and along The Lanes in Allerton Bywater, then back to Methley.

Although I was shattered, the important thing is that I did it and still believe I can be ready for London in 4 weeks time.

Today is Easter Sunday and there is plenty in the Easter story about belief.   St Thomas was one man who refused to beleive that Jesus had came back to life until he saw him.  When he did see Him…

“Then Jesus told him, ‘Because you have seen me, you have believed; blessed are those who have not seen and yet have believed.’”  ‭‭John‬ ‭20:29‬ ‭NIVUK‬‬

In the olden days (e.g 70s 80s & 90s), I used to regularly buy a number of magazines; in my case it was titles like “Practical Electronics” and later “Personal Computer World”.  In those days there was no Internet and it was always exciting opening those glossy pages to see what was new and what I could learn because they were the only way to get that information.  I can also remember reading most of the articles really carefully; it was valuable stuff!   Of course, I always have been an Internet aficionado and I wouldn’t want to turn the clock back, but in exchange for its benefits we have lost some things and that excitement of the latest magazine is one of them.

Not today though, today is a special day because my London Marathon official magazine has arrived and it brought back all that excitement and determination to read everything that I remember from my youth.

All the preparation and struggles so far have been put in perspective because having in your hand the official registration and race day instructions makes everything real.  I’m really going and it’s all in black and white: it’s official!

So onwards with the training!  I’ve made huge progress since I was well enough to start back running about three weeks ago.  I’m getting my running legs and confidence back that I can do it (well, I have to now)!