This popular expression comes from a list of “Seven Heavenly Virtues” which were invented to offset the “Seven Deadly Sins”.  These Seven Virtues come from   “Psychomachia,” an epic poem written in the fifth century.  Despite it’s ancient origins, this expression holds true, especially in the field of running where being patient can pay dividends.

Having been ill for most of January, my running fitness and strength has gone out the window!  This is something that all runners need to face up to at some time or other, either via injury or illness, it’s inevitable that you will be knocked back at sometime or other.  When this happens, all you want to do is get out running again and however, irrational it may seem, you want to start where you left off.  But of course, it doesn’t work like that!  I remember once recovering from a hamstring injury.  I thought I was OK so ran a 10 mile race too early and at the 5 mile point it went again.  I was back to square-one.

The last time I was hit by illness was last year and I can look back on how long it took me to recover.   As a benchmark I ran Leamington parkrun on Saturday at a time just over 27 minutes.  This was about the time I was running 5Ks back in August last year when I was starting to recover.   So, I did an analysis of my average times in parkruns during my recovery and  how long it took me to get from 27 minutes to around 23, which is a good time for me when I am fit.

It took me about three months, which tells me that I can not expect to be “back” until around the end of April and I shouldn’t expect miracles or be tempted to over-do things.

I can be thankful that years of experience and fitness means that I don’t lose everything.  I can remember when my goal was to do three miles in under 30 minutes and I remember what a daunting milestone that was.  I know that many runners would be aiming to run 27 minutes as a goal.  I also know of many runners who would consider my norm of 23 minutes as “slow”. Whatever level you are in running, your goals are equally challenging and your efforts and equally worth that of any other athlete, regardless of level! 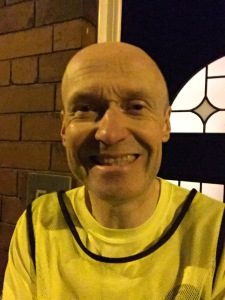 It  wasn’t supposed to be like this!  After an amazing December, meeting my goal to do 100 miles by Christmas and then the brilliant experience of running the Boxing Day Chevin Chase in the dry, I was all set for another few weeks of adventure with the New Year double parkrun and the Temple Newsam Ten (mile).

Yet all of it was not to be since on the Wednesday following Christmas (three weeks ago today) I had a sweaty fever with a temperature and have been battling the flu ever since.  I remember a few years ago an episode of the X-Factor where a contestant was summarily ejected from the competition on the first night by an unexpected snap public vote (presumably done to spice things up a little).  When this hapless young man was asked by Dermot O’Leary how he was feeling, his response, which has alway stuck in my memory for being poignant and honest, was simply “I feel like crap” which is also a good summary on how I felt.  People bundle together colds and flu but anyone who thinks they are in any way related can’t ever of had actual flu!  I snapped at someone at work who used the term “man flu”, what do they mean by that?

Seriously, it really is rubbish!  When you are someone who is usually so full of energy, getting up at 5AM to do a 6 mile run and all that, having to lie down because you don’t have what it takes to move around too much isn’t very nice.  I missed the Temple Newsam Ten which was a real shame because for me, it’s a highlight race.

One thing that did

cheer me up though was the December medal from Awesome Running Events, this reminds me of what things ought to be like.

So today I went out for my first tentative run for three weeks and I felt OK.  The plan now is to gradually get back into my stride because last time something similar happened, I did too much too soon and got injured.   I needn’t panic because the “big picture” is the Yorkshire Marathon which isn’t until October so a long and steady build-up plan is what I need.

‘Come to me, all you who are weary and burdened, and I will give you rest. Take my yoke upon you and learn from me, for I am gentle and humble in heart, and you will find rest for your souls. For my yoke is easy and my burden is light.’  Matthew 11:28-30 NIV