When the Green Leek run (10K) was described to me it appeared that the start of the race, the first half, was nicely downhill along a disused railway (a greenway), then it would transform itself into a brutal hilly and muddy trail race.  Now the muddy thing I have no issue with because for the last week or so, it’s been chucking it down and the forecast for the day has been doggedly rainy.  From last week’s St Aidan’s Half I am well used to muddy and as far as brutal trail races, bring em on!

The route is not one where you return to the same place you start, but instead the organisers lay on a bus from the car park at the finish to the start (where parking is limited).   But oh noooo, for us, we had a better idea; leave a car at the finish and then drive to the start to park up.  When we finally arrived at the start (after leaving a car at the finish), there was a helpful sign to the car park so we followed it.  The sign led into a field and it was then that we realised this was a mistake, a big mistake, huge!  This so-called “car park” was as I mentioned, a field.  The thing is, after a fortnight of rain, there is a different name they use for a field and that name is: mud bath!   It was soon apparent that most of the cars in the field weren’t going anywhere any time soon and so the drivers (including us) decided just to leave them there and make our way to the start of the race.  The race officials kindly reassured us that after the event there would be help to get our cars out!
As for the race itself, rain was definitely the theme at the start down the greenway and everyone was really glad to get started.  As it “said on the tin”, the first couple of miles were nicely downhill on a good path.  But because I am still trying to shake a cold, I really didn’t feel too good and today I really didn’t have much energy. I made up my mind early on just to plod on and get to the finish in one piece.  Meanwhile, my wife Helen was off like a rocket.
At the end of the greenway, I was very glad that the promised mega hills never materialised.  Maybe it was my misunderstanding but this was NOT a hilly race.  The final 5K was difficult terrain though, particularly due to the mud.  We had a disturbingly bouncy bridge, woodland paths, fields with grass and fields without grass (nice).
I was very glad to reach the end of the 6.5 Mile route (definitely more than 10K at the admission of the organisers) in a smidge over an hour.  There was a nice medal, lots of cake, and a welcome from running legend David Moorcroft who had given up his time to help out.
Now for the fun bit, we had to get back to pick up the Nissan Leaf, now being gradually consumed into the earth from which it originally came!   Arriving back at the field it was still there (and thankfully just above ground), lots of activity with runners helping each other free their cars but of race officials, there was no sign.  In fact there was no one from the race left at the village where it started because they had all gone to the finish, where the action was.  Mark (one of our number who owned the Leaf), was not a happy bunny at all and  Helen managed to get spattered with mud but eventually we got the car out.

Reflecting on the run, I initially was disappointed that I couldn’t do better but as a 58-year-old, I can do a tough trail 10K in an hour so I ought not to complain.  We will probably choose a different race this time next year but, as a positive we can take away, David Moorcroft was brilliant and such a nice man.  It is sobering to think that at the peak of his career, he held the world 5000m record meaning that once,  he ran the fastest 5K that ever had been ran before! 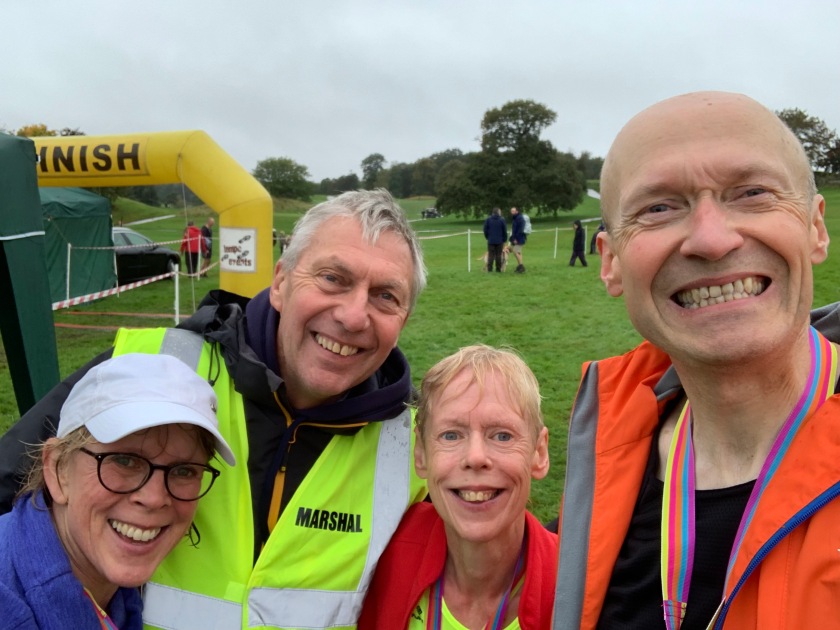 “From the fruit of his mouth a man is satisfied with good,
and the work of a man’s hand comes back to him.” Proverbs 12:14 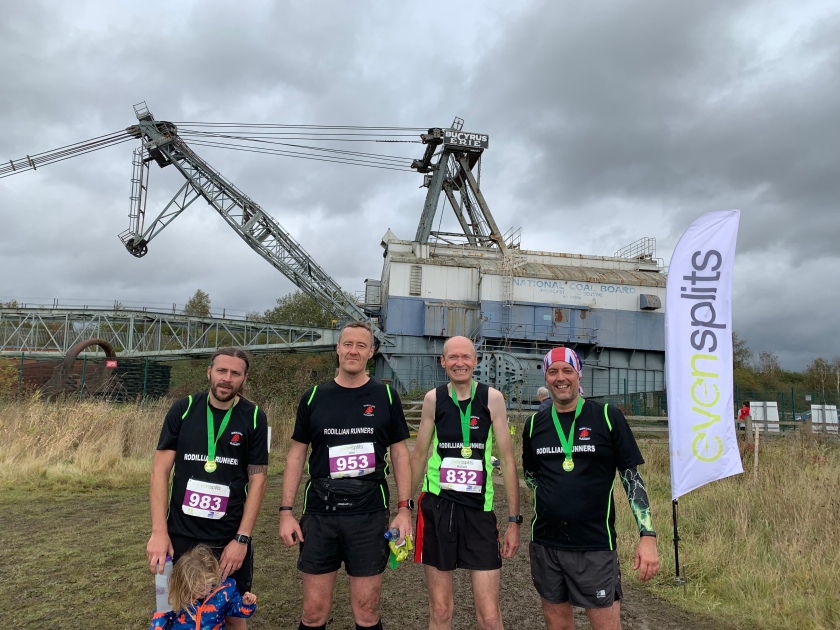 I love the St Aidan’s Nature Park as a place to run, particularly that it connects to another reserve, Fairburn Ings, which gives a vast network of footpaths through wonderfully scenic wetlands. Therefore the St Aidan’s Half Marathon is too good to miss.

As the days leading up to the event passed it was increasingly apparent that with all the rain that had been falling, the rivers and lakes were high and that on the day torrential rain was forecast. Now I’ve done trail races in similar conditions before and while afterwards you feel fantastic, running is pretty grim. When we did the Chevin Chase in 2015, at least we were able to shower afterwards but only just got home before the floods closed in. The prospect of having to drive home looking and feeling like the Creature from the Black Lagoon didn’t really appeal!

This morning I was expecting to wake up with rain lashing on the window but it was suspiciously quiet! There had been some rain overnight but it looked dry. Even though I had packed a plastic poncho and towel, it wasn’t raining at the venue. Nor was it too cold and I was glad I wasn’t over-dressed, having chosen to wear my running vest.

Although it wasn’t raining, the ground was extremely damp as we set off though 6 inch deep puddles covering the whole width of the path. Any prospect of dry feet went out of the window straight away (although strangely there were many runners trying to dance around the puddles). My combination of Solomon trail shoes and Sealskinz waterproof socks were definitely the business and although I can’t say my feet were kept completely dry, they were comfortable.

So, the first 5 miles felt relatively OK and I was sustaining a reasonable pace (under 9 minute miles). Then the path took a turn up a hill into the wind and this was the beginning of the end. It couldn’t have been just me because I wasn’t being passed by a herd of other runners, but my legs were definitely feeling it!

It wasn’t quite as bad as having to concentrate on simply putting one foot in front of the other but I did have to dig deep to sustain a semirespectable pace for the rest of the race. I was fortunate to be running with some other athletes with the same mindset so we kept each other going.

Running on soft muddy ground with puddles is hard and I think the effort of doing that rather than the relatively modest hill was to blame. The last couple of miles were through St Aidan’s on fairly good paths and I could pick things up again and chase down a couple of runners who had overtaken me earlier. I managed a descent finish.

At first I was disappointed being just over 2 hours for the course but looking at how hard it was (and by the organisers own admission, a bit long), I am quite pleased with today. It has been the first half marathon sized effort since I have been recovering from a virus, so overall it was a great result.

“Seven days from now I will send rain on the earth for forty days and forty nights, and I will wipe from the face of the earth every living creature I have made.’”