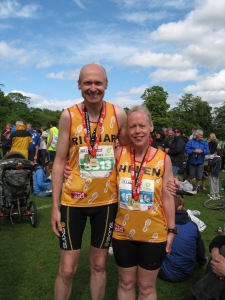 What do you do if you can’t go running?  That is, apart from drink wine, eat cake and watch a film (all of which I have to say, I did last night).  One idea is to sort through old running tops; the sort you get at the end of most mass running races, that you maybe wear a couple of times and then stuff in an already over loaded, running draw, never to see the light of day again.  My wife told me I had over 40 of these things stashed in various drawers around the house and that it was probably time for a clear out.

Now, running t-shirts are just things right?  True, but as I went through them they invoked some incredible memories and I started sorting them not by their quality or practicality but according to how valuable the memories were.  This is why we like taking so many photographs and why some people call them “memories”.    Today, photos play a different role in society than they used to because of the ubiquitous access to high-quality digital photography.  Today, almost everyone carries a powerful digital camera in their pocket and people will take pictures willy-nilly to record pretty much every enjoyable moment of their life.  After all, it costs nothing, unlike the day not so long ago, when developing and printing a roll of 36 exposure 35mm film would cost you several quid.  I have heard it suggested that by taking so many photos, we might actually be eroding our power to remember, because we rely so much on the pictures we take on our cameras and smartphones so much, causing us to neglect to store the memories in our heads.  I am not so sure because like my t-shirts the pictures aren’t the memory itself and don’t have any meaning, unless there a a powerful real memory to unlock.

This is why I never delete photographs and have them all backed up to multiple locations (cloud and otherwise), but should I get rid of t-shirts?  The answer of course is yes I should because it reaches a point where the degree to which they clutter, overrides any nostalgic benefit.  50 odd running tops take up a lot of space and it probably isn’t worth sacrificing all those drawers for an occasional browse down memory lane.  After all, I have my photo library and that isn’t going anywhere.  Talking of photos the picture shown in is of Helen and I after smashing the Edinburgh Marathon in 2011 and this leads me to the last point.

There are some things that I can’t bring myself to get rid of simply because they represent extra special memories.  I will keep my London Marathon tops for example, recent ones (which are practical) and some of my first, given out when I was starting my running journey.  After all, I need something to run in.

‘See, I will create new heavens and a new earth. The former things will not be remembered, nor will they come to mind.’  Isaiah 65:17 NIV