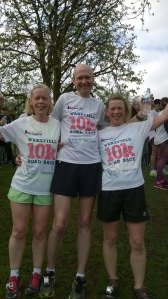 Just over a week ago I was feeling pretty miserable yet didn’t want to Blog about it because I always try and limit what I publish when I am prevented from running for whatever reason to avoid it reading like a big winge.

Late in December I went down with flu which really knocked me for six.  Then I seemed to be on the road to recovery but soon managed to catch a cold.  This didn’t last long but then a week after my last big race, Snake Lane, I started having this annoying pain in my foot.  A visit to the physio revealed that I had severe corns in my foot and I was referred to a chiropodist.  Trying o get a chiropodist to even answer the phone, let alone get an appointment with one is like trying to boil water by breathing on it but eventually I found someone who would see me.  Helen thought that there might be some reason why this guy could fit me in at such short notice and I had visions of the scene in Minority Report where Tom Cruise gets a back street eye transplant. However, I didn’t end up with Dr Death but rather a very nice chap who was quite sympathetic.  After looking at my foot and me explaining I ran a lot, he said he understood runners and I was not to worry as he wouldn’t be saying I should stop running.  (This probably meant that I ought to stop running but he knew there was no point him saying so).  He explained all the things wrong with my foot which made me even consider just having it cut off and replacing it with a blade!

However, after removing the corns he suggested that I ought to consider special insoles to compensate for my hideously mis-shaped foot.

About 7 days later however the healing process was going far too slowly and my foot was still painful.  To cap it all, I started developing yet another cold again and I felt like turning heavenward in the manner of Job (Biblical character who had a lot of bad things happen to him) and crying out “You cannot be serious!” (In the words of John McEnroe, not Job).  I could see all my hard work training being wasted and all my goals for 2017 slipping away!

So I went on a cycle ride with Helen and had a really nice time tackling the hills of Temple Newsam park and finding a route opened up by a new bridge (see previous post).

When I got home, it occurred to me that my foot only hurt when the pressure of my body weight came down on one tiny point.  I cut a hole in the insole of a recently retired pair of running shoes and found to my delight that this completely relieved the pressure and pain.  I went out for a steady two miles, resolving to stop immediately if there was a problem.  I got home in one piece and also noticed that my foot, including the sore spot felt a lot better; quite the opposite to what I was expecting.

This meant a possibility I couldn’t of imagined the day before was now a reality again, that I could be fit enough for the Wakefield 10K; a bit of careful training during the week and maybe, just maybe I could get round.

Today, about a week later I am chuffed!  Not only did I “get round” but I managed a sub 50 minutes time.  I was chasing the 50 minute pace man but he left me behind after around 5K.  He must have been flying because I still finished in 49:28!  Running with me today was my wife Helen and her sister Jill.  I am really proud of them both but today, particularly Jill who at 57 years old, ran the 10K in 54:09, a WAVA of a staggering 69.03%!

So I’m back running again, yay, but I have made an appointment with a professional to get to the root cause of my problem and get some proper orthotics to keep me injury free longer term.  My home modified insole might let me keep running but it’s not comfortable and I am sure if I continued with it I would be storing up more problems.

In the Book of Job, God chastised Job for his questioning of His purposes but He put all things right for him even so.  I find myself in a similar position, being thoroughly hacked off with my lot, only to find things aren’t so bad after all.

“After this, Job lived a hundred and forty years; he saw his children and their children to the fourth generation. And so Job died, an old man and full of years.”