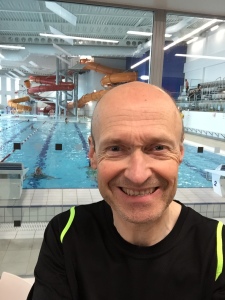 When I wrote about the Great North Run a few weeks ago, I was aiming to do the race in under 2 hours and was really chuffed to achieve that by some margin.  The Bridlington Half is one of my favourite races and I have done it for (it seems) many years.  It was kind of a last minute decision to do it this year but something in me wanted to so this morning, despite the somewhat what less than rosy weather forecast, I set off.

By “less than rosy” I mean that the forecast was for heavy rain accompanied by high winds from the South which is meaningful to anyone who has done this race before and has memories of that last slog to the finish along the coast.

At the start it was fairly dry, not too cold but a bit windy and the brand-new leisure centre provided somewhere indoors to hang about before “starters orders”.

My objective was to try and run under 1:55 so I had determined the pace I needed (about 8:40 minute miles).  As we ran the first several miles, which are all on average up-hill I was very pleased with my pace.  I heard some ladies nearby discussing their race goals and one said to the other she was aiming for under 1:54 so I felt in good company.  As time went on I kept up the pace and I kept up with the 1:54 woman so again I was quite comfortable.  Then as we ran down into town at about the 9 mile point I started to entertain the idea that maybe, just maybe I could get under 1:50.  This was a crazy thought because I know what a struggle those last 4 miles are through the streets of Bridlington and then into the wind along the coast, but I couldn’t shake the thought.  I had really done it now, I had managed to make it so I would have a twinge if disappointment if I didn’t make the new 1:50 target.  Deep down though I knew it wasn’t going to happen.

Toward the end of the race you go though a park and then turn right onto a path that usually carries a tourist train ride thing and heads towards the promenade where the finish line is.  This stretch is more than a mile and is notorious for being exposed and therefore very windy.  By this stage it had been “chucking in down” for quite some time and the wind had kicked-off, one had wet feet and sodden clothes! I don’t think I’ve been wetter since the Boxng Day Chevin Chase last year.  By the “one mile to go” point, it was clear, the 1:50 target was real but to get it, I would have to really “leg it” for the final mile.  As the finish post loomed I looked at my watch and there was a minute to go so I ran as fast as I could!  Then the finish line was closer and still 30 seconds to go…

Then I crossed the line, stopped my watch and when I looked down I saw it said 1:49:52.  Now that was close but I was so elated I didn’t care; not in my wildest dreams would I have thought I was fit enough to do that in those conditions. 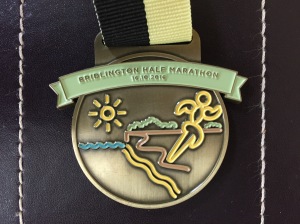 So how do you set the right goal?   I don’t know, but set something realistic, that way you might surprise and delight yourself.