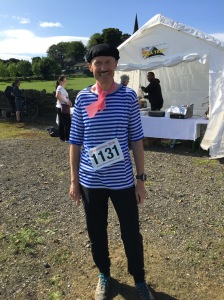 The running experience today was a little different.  At 11:30 AM the Rodillian Runners set off in a minibus to the charming little villiage of Thurstonland set in the stunning Yorkshire countryside near Holmfirth of Last of the Summer Wine fame.  This is fitting because today we ran the Yorkshire Wineathlon.  You probably don’t need too many guesses as to what a Wineathlon actually is so you probably get the picture; wine stations instead of water!

To avoid any danger of taking things too seriously, we started off in the beer (or wine) tent and it felt liberating in a way, to break the number one rule of running: never drink alcohol before a race.  The one aspect of the event that was deadly serious was the selection of appropriate fancy dress!  Our lot turned out as representatives of wine making countries around the world so we had for example, a French garlic seller, a Roman empress, an Ausie, a German and an Austrian.  The top marks has to go to Jason who turned out in a full American football outfit and you wouldn’t believe how heavy those shoulder pads are.

Our swift runner Jen, broke all the rules and decided to WIN the ladies race but a few others took a different path and stopped at the pub about 1/2 way round the route.  This is definately the way forward for future participation in this event even though for being First Lady, Jen won a bottle of wine.  Since in no possible scenario could I see myself being be first gentleman or anything close, then going to the pub is definately the preferred option.

At one of the wine/water stations someone made the crack that they had turned water into wine.

“and the master of the banquet tasted the water that had been turned into wine. He did not realise where it had come from, though the servants who had drawn the water knew. Then he called the bridegroom aside and said, ‘Everyone brings out the choice wine first and then the cheaper wine after the guests have had too much to drink; but you have saved the best till now.’”