Where do you like to go on holiday?  This year we decided to have a mountain holiday in the Alps so we went to the wonderful little resort of Kranjska Gora in Slovinia, just on the borders of Italy and Austria.  What was the most demanding mountain trek on the itinerary?  Well, there is a mountain pass known as the Vršič, which climbs over 800 meters (relative to the town) and is around 7 miles to the summit.  It is popular with cyclists, at least the macho ones who fancy themselves as “King of the Mountain”!  There is an organised group which leads a walk up to the summit which takes 3.5 hours to get up and 3.5 hours to get down plus some time at the top to admire the view and eat lunch; a gruelling 8 hour day!  We didn’t fancy that so we had a thought: why don’t we run it? (Or at least being realistic, run-walk it).

I guess the simple answer to that question is: “because it’s a stupid idea”,  but we asked the local guide for advice anyway.  She reckoned that the best bet would be to run up the road rather than the mountain paths because they might be too treacherous for running (and after experiencing some of the alpine trekking “paths” I can well believe it).

So on Saturday morning we set off, with a small backpack each containing water and lunch (although to be honest there are plenty of places up the pass where you can buy refreshments).  We knew it was going to be a 7 mile slog uphill but surprisingly we made good progress up to the 3.5 mile point, around half way.

Then we began to feel it as the pass “proper” got really underway with numbered hairpin bends (going up to 24 although thankfully we didn’t know that); I guess the temperature was north of 25 Celcius and the sun was shining!  There was a great sense of shared suffering with the cyclists as they made their painful way up the same route and we even encountered another couple of runners, one going down and the other overtaking us going up!

The views going up were utterly stunning and so we had to make time for a few photos.  There was one spot where there were hundreds of little rock piles which are obviously added to and maintained by passing tourists. 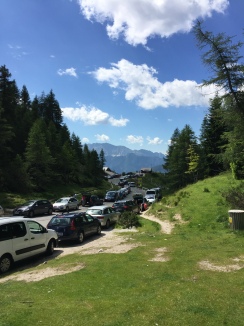 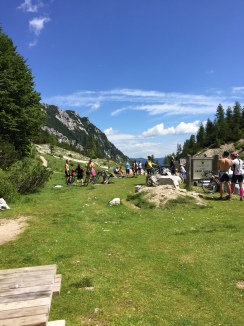 Finally, after just over two hours and the last few hairpins , we reached the highest point and were able to relax for a bit, admire the views and eat our light lunch. We were treated to a shot of schnapps by a lady running a kiosk where we bought some diet Cokes and ice creams.  What a busy place, with loads of cars joceying for limited parking and a collection of very exhausted looking cyclists!

I must confess that I was a bit apprehensive about the run down because I wasn’t sure how our legs would cope.  However, it wasn’t as bad as I thought and it was a blessed relief to be going down-hill for a change.  As we navigated and counted down the hairpins, the overwhelming emotion was “how on earth did we manage to get all the way up through this?”.   We had to keep our wits about us to watch out for other traffic; cars and coaches going up and above all, cyclists doing warp-factor speeds down.

Eventually, things levelled out a bit and we had to cope with a few sections of gentle up-hill; man that was hard!  The final 1/2 mile was from a place called Lake Jesna, downhill to our hotel in Karanjksa Gora which was a nice relief.  All in all our return trip was a little over an hour; not bad going.

I am writing this the day after and I have a couple of achy legs but a great sense of achievement that we managed to get all the way up and all the way down in less than the time it takes a walking party to go one way.   We hadn’t planned this as part of our holiday but it was a brilliant experience!

Deacon at Rothwell Baptist Church, IT Solutions Architect at Fujitsu, Distance Runner with Rothwell Harriers. Expect blogs on all of these themes! View all posts by MarathonMannUK

One thought on “Passing out”