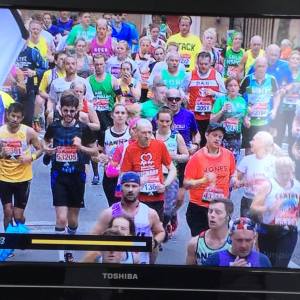 You’re in a field full of about a million other expectant runners; its cold and you just want to get going but since you’re shivering, 26.2 miles seems an even more daunting prospect that usual!   As the starting signal goes, you discard the charity shop top that’s keeping you warm (they collect them all afterwards and they go back into the charity shops), cheer (almost half heatedly) and then half walk/half jog towards the start mat.

Then you go around the corner towards the actual start and everything changes. It’s an emotional moment and to me it brought such a grin and even tears welling up as I entered a different world.  The grandstands full of a cheering crowd, the mass of runners starting ahead it was an astonishing and unforgettable moment.  After all, this was the London Marathon!

I’m not going to give a mile by mile commentary of my London Marathon experience but it was an emotionally highly-charged roller-coaster.  In the first half the mile markers seemed to go by in twos and threes but in the last six miles they seemed as rare as rocking horse shit!  The last six miles was the most difficult thing I have ever done in running because even though I kept going, my legs had given up the ghost miles ago!

The abiding memories though are of the points along the route where the support of the cheering crowd was overwhelming, the town centres and landmark spots like the Cutty Sark, Tower Bridge and Canary Wharf.  In the last six miles it was continuous and my name was shouted out seemingly at every few paces.  It was this that meant that you absolutely had to keep going because this was better than any physical drug this was human willpower – mind over matter and the demonstration of the very best of human nature.

The last three hundred metres were both glorious and painful.   You turn the corner from Birdcage Walk into the Mall by Buckingham Palace and then you see the most inviting thing on the planet at that moment in time: the welcoming red finish tunnels.  You keep going although your body has shut down because the noise of the supporters is immense and then finally after, a seeming age, you cross those finishing mats.

So, what of the London Marathon?  I can quite honestly say that in all of my running experience there has been nothing else remotely in the same league.  It is both the most amazing and also the hardest thing I have every done and so I remain grateful for the opportunity.  So, if you want to do a marathon, try your hardest to get into this one because it is absolutely fantastic.

Finally, many people said almost jokingly “I’ll look out for you on the TV” but the most astonishing thing is that my big sister did just that and actually spotted me.  What’s more she managed to photo the TV to prove to the word that this particular Marathon Mann, was on the telly!

“I can do all this through him who gives me strength.” Philippians 4:13 NIVUK

Deacon at Rothwell Baptist Church, IT Solutions Architect at Fujitsu, Distance Runner with Rothwell Harriers. Expect blogs on all of these themes! View all posts by MarathonMannUK