Since I wrote about my journey back to fitness last week, quite a lot has happened. I confess I was quite apprehensive about the race I was due to run on Sunday and wasn’t at all sure about whether I would be truly ready.

On Tuesday of last week I led training at the running club as usual. Our session was a gentle social run that we do from time to time where everyone runs at their own pace, stopping every so often for a little chat and a chance for people not running so fast to catch up. I really felt good during this session and was able to run at various paces with ease. I then did a couple of runs on my own over the next few days and for the first time since I was ill, I could let my mind wander and not be totally focussed on finding the energy simply to put one foot in front of another! Progress indeed.

Now we come to the weekend. My club had two things on over the weekend. On Saturday morning we took over Rothwell parkrun (filling nearly all of the volunteer roles) and thankfully everything went smoothly. On Sunday we were going to run the Leeds Country Way relay where so many things had to fall into place logistically for the team and, personally, I had the challenge to make it to the end of my leg. So, I turned up at the race HQ to register the team at 7:00 AM and set our first two runners off on the first leg, which started at 8:00AM. Then, it was up to our first three pairs of runners to get the baton round to the hand-over point in Thornbury, Bradford from where I (and my partner) would carry it through to the next pair waiting at Golden Acre Park.

I was running my leg with a very capable and experienced athlete, our club chairman, “Rocket” Ron Needham. Ron, who is just over 10 years my senior, recently came out of “running retirement” to take an active part in many club events. At the peak of his career, Ron was the kind of athlete who won mass running races and the nickname of “Rocket” is very appropriate. On Sunday the reality of the situation was that it would be me making an effort to keep up with Ron rather than the other way round. Maybe it was that motivation that worked because, to my surprise, I managed to shave some minutes off my time for the same leg last year, even though I was much fitter back then.

The Leeds Country Way is different to most other running events in that runners are supposed to learn the route through the footpaths around Leeds and find their way without marshals! At some places the going is very tough and seldom used footpaths are over-grown with nettles, thistles and brambles. It is for this reason that I always wear long running tights for this route regardless of the warm weather. On Sunday this was a wise move because many bare legged runners were red and raw!

Reflecting on my own recovery and my impatience to return to full fitness I have to put things in perspective. I can today at 58 years of age run 11.5 miles through hilly and bramble ridden footpaths in under 2 hours without feeling worse for wear. When I look at Ron being able to do what I do while being 10 years older, it spurs me on. This weekend has reminded me not to feel sorry for myself but keep on going; running shorts or longs, whatever, the right trousers!

“Remember the days of old; consider the generations long past. Ask your father and he will tell you, your elders, and they will explain to you.” 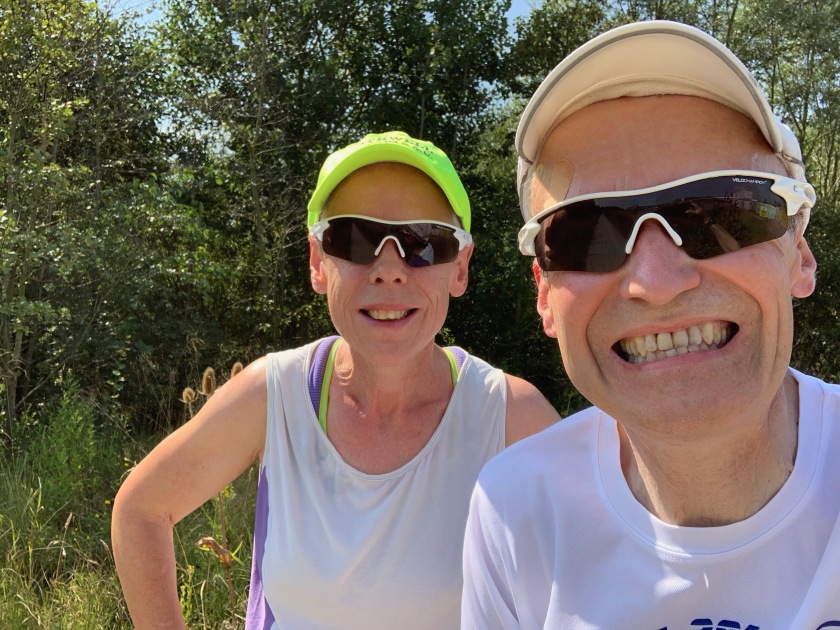 It doesn’t seem that long ago since I was publishing a daily blog about my challenge to run 10K every day during June.  That was an amazing experience and it was topped by a couple of brilliant races I had during July.

That was when I was struck down by a flu like virus which took me out of action for pretty much a whole month.  Even now I feel some residual effects and some of the things I could do with ease just a few months ago now feel like a real struggle.  I haven’t really added much to my blog since I fell ill but yesterday I thought that I ought to write.  The journey back to health and fitness is a real story and is definitely something that ought to be written about.   When you, as a runner, are inured or ill it can be very discouraging and you can be downhearted.  However, for me, I have been here before and know I can come back and be even better than I was before.  It’s not going to be easy but in this game, no one ever said it would.

So, in the last month or so my best 10K time is around 10 minutes off where I would like it to be.  In a few races I did a personal worst time and as I said, quite a few things I take for granted are a struggle.   In 7 days time I am competing in a race called the Leeds Country Way Relay as captain of my team.   This requires me to run, with a partner, a gruelling 11.5 mile trail route though the hilly countryside north of Leeds and it’s tough even if you are fit.  We did a practice run last week and my partner (some years my senior) and my wife Helen (who I can usually beat over any distance) had to wait for me to catch up on many occasions.  Will I be much better next week?  Time will tell.

On the plus side, I went out running with Helen today and we ran a lovely route through the countryside by a lake, even though it was about 26 degrees Celsius (feeling more like 30).   Although this was tough it was fun and that, after all, it what it’s all about.

My plan therefore is to blog about my journey back to full fitness.  Hopefully it will be interesting and by the end of it I will be recounting some much better performances and results.

Today I ran my 300th parkrun and by coincidence, it was my first day back running after a torrid three weeks of fighting off a nasty virus.

People have been really nice to me today and saying what a wonderful achievement 300 parkruns is (and who am I to argue).  I remember the early days of parkrun where there was only one event outside London, in Leeds.  Back then, the ultimate prize was to achieve the 100 run milestone and receive a black t-shirt and jacket (sadly no .  Little did I think that one day I would be achieving the 250 milestone and even reaching 300!  The thing is though, all I have done is be in the right place at the right time when it all started and simply kept going.

I think perseverance is probably one of the most, or even the most, challenging aspect of running.  Many people do it for a bit and give up, or stop when it’s winter time or when they have been ill or injured.  Running however is a sport that needs to be treated with respect and doesn’t react well to the hot and cold treatment.

For me, I could lament the fact that my fitness has gone back some months and I have now to train a lot to get back to where I was in June, where I managed to run 10K every day and afterwards where I was achieving stand-out times in races.  I’m not going to moan though because the greatest thing is the journey.  What I mean is the fun is the training, gradually getting better and fitter and building up to new goals and achievements.  Where that leads is for me, the motivating factor.  Keeping in tip-top shape is great and presents it’s own challenges but you can’t always do that so building yourself up again is actually a great place to be and I revel in it.

One of my favourite Bible passages is from James and I have probably quoted it before but today it has particular relevance.

“Consider it pure joy, my brothers and sisters, whenever you face trials of many kinds, because you know that the testing of your faith produces perseverance.  Let perseverance finish its work so that you may be mature and complete, not lacking anything.”