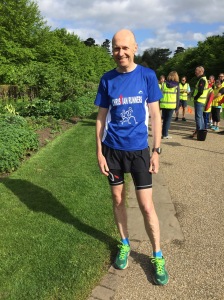 When I went out running at 5:30 AM last week, a man unloading something at the hotel where I was staying said “you must be mad”.   In my experience as a runner, you do hear this kind of thing quite a lot and I found myself wondering why what we do is so difficult to comprehend from outside the sport.

Now I grant you that running is hard and sometimes you put yourself through discomfort and pain.  The last 6 miles of the London Marathon was one of the hardest things I have ever put myself through yet I found myself desperate to do it again! When I was running the Bedford parkrun this morning, I overheard a man talking to a boy (presumably a father to his son), “it’s got to hurt, otherwise you won’t get your PB, come on, not far now, dig deep!” and the kid wasn’t being coerced, he wanted it!

Of course it’s not all about struggle and most of the time running is a great joy, you experience all the benefits of being active and fit and you see the seasons of nature through the year in a way that passes most people by.  Now I know that some runners have difficulty motivationally at times and need to discipline themselves to get out and I feel fortunate that I never seem to get that.  Sometimes looking forward to my next run dominates my whole day and in the case of the build-up to the London Marathon, even longer!

There is a scientifically understood chemical mechanism that causes the so called “runners high” which can produce a feeling of euphoria following excercise related to that experienced by a drug addict.  This is because naturally occurring endorfines associated to the runners high are related to morphine.  Although I do recognise this sensation I think that the true love of running has more to it than that, because the emotions I get last beyond that short term high.  For me, I remember a time when I lived a very unhealthy sedentary lifestyle and because of that I can fully appreciate now, what it’s like to be fit and active. I think it’s the effect that activity has on all aspects of life that appeals to runners like me who can’t get enough of it!

“Do you not know that your bodies are temples of the Holy Spirit, who is in you, whom you have received from God? You are not your own; you were bought at a price. Therefore honour God with your bodies.” ‭‭1 Corinthians‬ ‭6:19-20‬ ‭NIVUK‬‬ 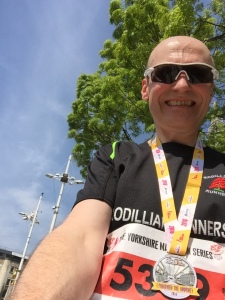 I love the Leeds Half Marathon; it was the first running race I ever entered and it has remained special to me.  I was really looking forward to the race today even though the weather forecast was that it was going to be the warmest day of the year so far!

A week and a day after the London Marathon I had been a naughty boy and run the East Leads 10K.  In that and the club paarlauf session the following day I had ominous pain near one of my knees and so for the rest of the week I had obeyed my physio. and done nothing, taking his advice that “more is less”.  Even though this half marathon was in that context, a bit of a risk, I still had a very good feeling about it.

Well in the end it was a wonderful day and although I was far from my best, I managed to keep going all the way round and not an ache or a pain before, during or after.  I am so chuffed about that because I now know I have a core of strength on which I can build up my training mileage (gradually).

Man, it was hot though!  I think as I ran up Kirkstall Road; the last 4 miles, it felt like 30 degree heat (although the reality is that it was nearer 20).  As I crossed the finish line I felt as shattered as in any other race so I knew I gave it my all.  I was determined to keep running and not run-walk and this determination won!

I was really impressed with the other runners in my running club, Rodillian Runners.  All did brilliant performances and for one at least, it was their first half! 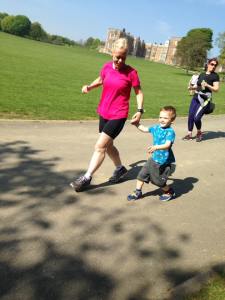 Today was also my 4 year old grandson Brandon’s first junior parkrun and the news is he really enjoyed himself.  I wonder how long it will take him to outrun Grandad?

“In Bangkok
At twleve’o’clock
They foam at the mouth and run,
But mad dogs and Englishmen
Go out in the midday sun.”  Noel Coward

“It rises at one end of the heavens
and makes its circuit to the other;
nothing is deprived of its warmth.”  Psalm 9:6 NIVUK 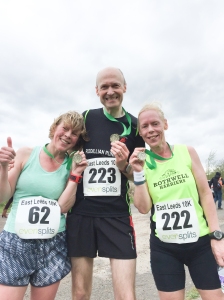 Its great when everyone in a group achieves what they are aiming for in a running race.   Since my very measured and careful marathon training (where speed was far from my mind), I have now set myself a number of steps to build up my performance to what it was before I found trouble with my heart.  The fist of these steps was to do 10K in under 55 minutes and the setting was the wonderful Leeds 10K around St Adans RSPB nature reserve.  My marathon legs managed to achieve this with some margin to spare and I was very pleased with my 53:18 (not too far behind last years time of 51:11).

Not only this but I had two lovely ladies with me, my wife Helen and her sister Jill.  This was Jill’s first ever running race!  Both of them wanted to do the 10K in under an hour and they both came in at around 58 minutes, smashing their goals and causing smiles all-round.  Boy those girls are competitive, the one that came in first was only decided in the last 200 metres. Helen has always been fiercely competitive so I have persuaded her to sign up to the Awesome 100 mile challenge in May; all being well we should end up with his and hers medals at the end of the month!

Next weekend I have the Leeds Half Marathon to do; a task of a different order of magnitude!  One of my recovery steps is to do a half in under 2 hours and who knows, maybe I’ll be fit enough next weekend to do that; I love the Leeds Half and it’s been a vehicle for PBs in the past.

Finally, today’s the day that the Virgin London Marathon ballot opens and I couldn’t resist applying again.  The chances are very slim but it would be great to do that again.

“Do you not know that in a race all the runners run, but only one receives the prize? So run that you may obtain it.” 1 Corinthians 9:24 NIVUK